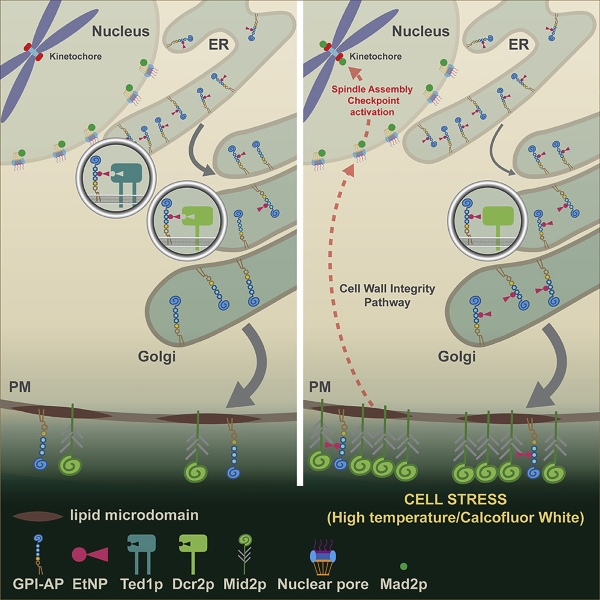 Remodeling of GPI-anchored proteins is essential for yeast cell viability

Positioned at the C-terminus of many eukaryotic proteins, the glycosylphosphatidylinositol (GPI) anchor ensures that specific proteins can hold onto the cell membrane. If the GPI anchor does not function properly, it can lead to a group of rare diseases that primarily cause intellectual deficits and developmental delays in humans. Previous works have demonstrated that the newly synthesized GPI-anchored proteins (GPI-APs) must undergo extensive remodeling before transport to the cell surface. In the current study published in Cell Reports, Prof. David Banfield and his research team have discovered two remodeling events crucial in yeast cell survival.

A common minimal backbone of GPI moiety consists of inositol phospholipids, a carbohydrate core containing mannose and glucosamine, and an ethanolamine phosphate (EtNP) bridge, which links the to the C-terminus of a mature protein. After translation (protein synthesis), the precursor proteins contain a signal sequence directing them to the endoplasmic reticulum (ER), where the core GPI is added. The nascent GPI-APs will undergo several remodeling steps in the ER and the Golgi apparatus before transport to the cell membrane.

The GPI-AP remodeling processes have been extensively studied in mammalian cells and yeast. The removal of EtNP from Mannose 2 (Man2) in the ER is carried out by PGAP5 in mammalian cells and Ted1p in yeast. Using a genetic approach in yeast cells, the Banfield lab has revealed that EtNP is removed from Man2 of yeast GPI-APs in both the ER (via Ted1p) and Golgi (via Dcr2p). These remodeling events together are essential for cell viability.

The Banfield lab has previously determined that VPS74 is involved in the retention of Golgi membrane proteins but not essential for yeast cell growth. This study found that simultaneous deletion of VPS74 and TED1 was lethal to yeast cells. Therefore, they generated a temperature-sensitive strain of the double mutant vps74-1 ted1Δ to investigate the functional relationship between VPS74 and TED1. Their results demonstrated that double mutant vps74-1 ted1 cells displayed G2/M cell cycle arrest and calcofluor white (CFW) sensitivity, which correlates with cell wall integrity in yeast. Blocking the spindle assembly checkpoint (SAC) by deleting genes encoding SAC components could restore cell-cycle progression and suppress CFW sensitivity.

Among candidates identified in the genetic screen, Dcr2p is the only gene unrelated to the G2/M transition. The team discovered that cells lacking both TED1 and DCR2 are not viable. Since Ted1p and Dcr2p both contain a calcineurin-like phosphodiesterase domain, the researchers proposed that Ted1p and Dcr2p might share overlapping substrate specificity. Their data confirmed that Dcr2p could remove EtNP from Man2 of GPI-APs, but Dcr2p is a membrane protein of the Golgi, whereas Ted1p is localized to the ER.

Similar to the vps74-1 ted1Δ cells, deficiencies in Ted1p and Dcr2p (dcr2-6 ted1Δ mutant cells) led to G2/M cell cycle arrest and CFW sensitivity. Given that CFW can activate SAC in dcr2-6 ted1Δ mutant cells implicates components of the cell wall integrity (CWI) pathway. One of the major sensors of the CWI pathway in responding to cellular stress is MID2, which encodes for an O-glycosylated plasma membrane protein. In fact, the presence of EtNP on Man2 of GPI-APs in dcr2-6 ted1Δ mutants could activate SAC via Mid2p as deletion of MID2 could suppress CFW sensitivity, whereas concomitant deletion of other cell wall sensors in the cell wall integrity (CWI) could not.

This work highlights an unexpected feature of GPI-AP processing in yeast cells and the functional link between cellular stress response and cell-cycle checkpoint. 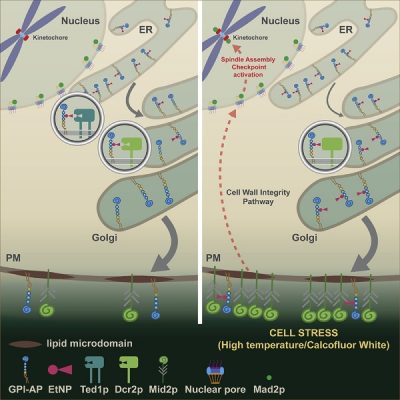 Remodeling of GPI-anchored proteins is essential for yeast cell viability